I am honored to have received 35% of the vote yesterday.

When I pulled papers six months ago, no one in Somerville outside the arts community knew who I was. I was out-spent by a margin of 10 to 1, in a race against a candidate who was supported by the city’s elected officials. As late as yesterday, the prospect of a young renter newcomer running for office was still meeting with reactions of “how dare you”.

And yet, 35% of ward 6 voters came out to show City Hall that renters and young people WILL vote; that homeowners and long-time residents are excited to create a more equitable housing market for their neighbors and newcomers; that doing everything by the book is not the only option.

Democrat, renter, educator, cyclist, feminist, progressive.  Endorsed by the Somerville Journal and the Somerville Times. Featured by the Boston Globe, Somerville Scout, and Boston Magazine as an emerging voice in regional politics and affordable housing advocacy.

“Weinbloom’s push to represent the city’s renters is a perspective that would be very useful on the Board of Aldermen. We endorse Elizabeth Weinbloom for Ward 6.”

“We endorse and hope the residents of Ward 6 agree that a different kind of candidate in Elizabeth Weinbloom should be considered for your vote.”

Elizabeth is a tenant, an educator, an organizer, a musician, a cyclist, a feminist, a writer, a neighbor, an ally, a roommate, and the Democratic candidate for Ward 6 Alderman.  She has chosen Somerville as her home and community since 2008.

Elizabeth’s interest in local politics grew from her realization that while she and her roommates want to build their lives in Somerville, they may not be able to afford to do so.  Elizabeth is running for the open Ward 6 seat on the Board of Alderman to ensure that all households will be able to continue living, working, and creating in Somerville into the future.  Visit the Affordable Housing page to learn how.

Elizabeth is the only tenant running for an elected office in Somerville; 2/3 of Somerville residents rent their homes, but all but one of our current elected officials are home-owners. Development is making Somerville ever more desirable, but also more expensive. We need creative policies and committed leadership to keep Somerville livable for the diverse community of renters, students, immigrants, young families, retired people, and artists who make this city great.

Elizabeth came to the Boston area in 2003 to study at Harvard, having grown up in the New York suburbs. Her first apartment was in Union Square, and she continued renting in Union while she earned a masters in education. At the start of 2014, Elizabeth began making her home in a rente

d house on Chandler Street with her wonderful roommates.

Elizabeth values Somerville’s vibrant arts community, in which she participates as a creator, performer, and consumer. She has produced several large public events in Somerville, including the Ides of March street fair last spring (a collaboration with the Somerville Arts Council) and the Boston Funk Orchestra’s Disco Ball at the Somerville Armory. An amateur cellist, blues and swing dancer, and occasional playwright, Elizabeth also helped found a Somerville-based living room theater troupe. She and her roommates enjoy hosting performances for Porchfest and throughout the year. 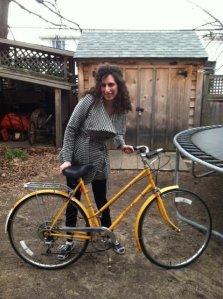 Elizabeth’s education profession will make her a strong bridge between the Board of Aldermen and the Schools Committee. She develops lesson plans, teaching guides, and online courses, working with school districts and educational organizations across the country. Elizabeth is a quick study; she gets on top of complex issues and finds the right questions, skills that will help Elizabeth serve Somerville. Elizabeth’s work has the added benefit of being flexible and remote, giving her the availability to commit to the hard work of representing ward 6.

Elizabeth walks, cycles, and rides the MBTA to get around. She is a Hubway member and thinks the bike-share network is a fantastic supplement to traditional public transportation, but Hubway’s host communities must push the network to expand to lower-income neighborhoods. Elizabeth will work to improve bike lanes and signage in ward 6, and she is committed to making our public spaces more accessible for people of all mobility levels.

Elizabeth’s candidacy is endorsed by the editorial pages of the Somerville Times and the Somerville Journal, and she has been featured as an emerging voice in regional politics in the Boston Globe and Boston Magazine.

On November 3rd, vote Elizabeth to tell City Hall that addressing housing affordability must be our top priority.

Safer streets for all