Elizabeth is committed to supporting local artists and businesses in her campaign.  Her posters were designed and letterpressed by Eli Epstein at Union Press on Somerville Ave.  Elizabeth also commissioned a campaign song from Somerville musician Amy Kucharik, with video by Somerville director Jonathan J. Carpenter.  Watch Somerville Song here.

Somerville isn’t a place where “the arts” is one weekend festival per year; it’s a place with weekly brass band parades, a constant rotation of buskers and performers, festivals attended by visitors from across the region, a vibrant culture of visual artists working in their homes, and a whole wide weird range of events nearly every weekend from May to October.

This creative energy is why our city is so popular these days. But that popularity also means rising rents that push artists and performers to live in Medford and beyond, sends a game-changing hub like Artisan’s Asylum looking for a new home it can afford, and incentivizes owners of landmark arts venues like Johnny D’s to convert their beloved club into condos. Somerville is great at supporting the arts. But it has a ways to go in supporting the artists. 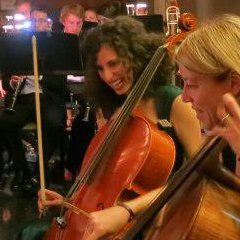 Elizabeth is an amateur artist herself: she plays the cello in a community orchestra and is a regular performer with Small & Casual Productions, a Somerville-based musical theater troupe that performs in living rooms.  She’s also a playwright, having worked on projects as diverse as an adaptation of Julius Caesar for the Ides of March street fair in Union Square and an Animaniacs burlesque show.  Elizabeth worked with the Somerville Arts Council to create the Ides of March street fair, so she has seen first-hand what wonderful things the SAC can create with remarkably little funding.  As Alderman, Elizabeth will seek to further support the SAC and other organizations and grant-makers that fund local artists.  Most importantly though, she will aggressively pursue affordable housing policies that will help Somerville’s artists stay in Somerville.